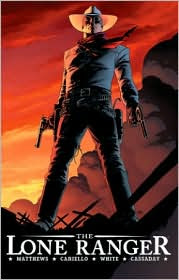 (This is my latest entry for Patti Abbott's Forgotten Books Project.)

Reboots can be a tricky thing. When you get it right (Batman Begins, Casino Royale, Star Trek), it’s fantastic. When you get it wrong (Terminator 3; Terminator: Salvation, Indiana Jones and the Kingdom of the Crystal Skull [not a true reboot but it keeps with my thesis]), it’s horrible. Thus, when I learned that Dynamite Comics was re-introducing The Lone Ranger, I was hesitant. This is one of the longest and storied franchises in pop culture.

Most everyone knows at least one thing about the Lone Ranger, even if it’s tangentially. Would the writers and artists update this beacon of goodness with a bunch of violence and language (in short, would they “Deadwood”-ify it) or make it too cheesy? Curious, I bought volume 1 trade paperback and cracked it open.

Boy, was I worried for nothing. I haven’t read anything this entertaining since Gabriel Hunt at the Well of Eternity or Tarzan of the Apes. As Geoff Johns writes in the introduction, this new comics adventure of the Lone Ranger and Tonto is an updating to the legend but all the aspects of the legend remains intact and in place. What writer Brett Matthews has done, however, is give order and an origin to just about every aspect that we know about the Lone Ranger.

This is an origin story, plain and simple. Texas Ranger John Reid is the lone survivor of an ambush. Fellow Rangers perish including his older brother and father. Reid himself is barely alive before Tonto, a Native American Indian, nurses the dying Ranger back to life. Here, Tonto’s origins are merely hinted at in off-hand references and stoic silences. You get the sense that Tonto is older and wiser than the young Reid who has to come to terms with what happened and his desire for single-minded revenge.

One by one, all the elements that make up the whole of the Lone Ranger legend gets a spotlight shined on it. Why Reid wears a mask. Check. Where he gets the silver. Check. How he finds his horse, Silver. Check. And, in a touching moment, why he says “hi-yo Silver.” It’s all here. Oh, and Butch Cavendish is here, too. Of all the things changed, Cavendish is the one. I can’t quite remember what he was like in the old radio shows or the TV show but, suffice it to say, he probably wasn’t what he is here. There’s also a hired killer and he’s a bad ass.

The relationship between the Lone Ranger and Tonto is the best part. Tonto keeps prodding the young Reid to be the man he knows the west needs. He does it by teaching, sometimes with words, sometimes with fists. There’s a lot more light-hearted banter and comedy than I expected but it doesn’t detract from the sobering themes of revenge and justice and finding one’s place in life. A nice touch in the dialogue bubbles is the use of smaller text to indicate whispering or off-hand asides. It brings the entire story that much more into realism.

The art by Sergio Cariello is fantastic and quite detailed. There are whole pages and panels where you can see and feel the dirt and grit of the old west. Others are the mark of subtle artist, displaying all the emotions in the eyes. The giant splash pages and covers are magnificent and really evoke that old-school charm of the Lone Ranger.

I only started reading westerns last year and already I’ve been bitten by the western bug. I’ve read a few since then (I’ve even written one with more to follow) but I’d have been reading westerns for a couple of years now had I read The Lone Ranger when it debuted in 2007. Do yourself a favor: pick up this trade paperback and return to those thrilling days of yesteryear.
at November 06, 2009
Email ThisBlogThis!Share to TwitterShare to FacebookShare to Pinterest
Labels: Comic books, Graphic novels, Lone Ranger, Pulp Fiction, Pulp heroes, Westerns

MY absolutely favorite western as a child.

Scott - good to find you on here, too! What is your take as far as reading level on this? My 10 year old is starving for good lit that isn't too "adult" in content, you know? He's an advanced reader, so I'm not so concerned about the reading level as I am the content.

I wouldn't have thought I'd find this interesting but you've intrigued me.

Patti - He was probably my mom's favorite, too. Well, The Lone Ranger and Tarzan.

Judy - I just leafed through the pages since it's been a few weeks since I read it. There are some graphic images in there, trying to show in a realistic fashion what happened in the old west: ambushes, gunshots, arrows shot through necks, vultures preying on corpses. I'm not sure what your ten-year-old is used to. Content-wise, it's probably okay. Art-wise, it might be slightly adult. My recommendation is to find a comic store and take a look at the artwork yourself. Ironically, volume 2 is much less graphic that volume 1. However, the major theme of this first volume is great: how TLR initially wants to kill those who killed his brother, father, and friends, and how he chooses the path of redemption through non-killing.

Charles - Yeah, give it a chance. Dynamite Comics have some great titles and unique combinations. Check your local library and see if they have a copy. I've got volume 3 on my Christmas list.

I used to watch the TV program faithfully as a child. I think I will revisit by reading this book. Thanks, Scott.

Speaking of comics and being a fan of sci-fi, I just thought I'd mention:
Back in the early 90s there was a fledgling comic company called Innovation. They'd managed to obtain the rights to some classic TV series including Quantum Leap and Lost in Space. The stories in the comics essentially picked up after the shows had ended. The artwork was absolutely brilliant (although there were complaints that Penny & Judy were drawn a bit overly sexual. As an adolescent male at the time the comics came out, I was not one of the critics complaining about this). And Billy Mumy (Will Robinson) was a contributing writer/artist on Lost in Space. Of the two, Lost in Space was the better written, it was set about 3-5 years after the show had ended. Will Robinson was written as a very sexually frustrated angsty teenager (then again, wouldn't you be sexually frustrated if the only human females around were your mom and your 2 older sisters?) Unfortunately, that comic company went out of business after only a handful of issues (Lost in Space had 18 issues, 2 annuals, and the first of a 2 part mini-series that was later completed in a TPB). Incidentally there was also a "love-triangle" that developed between Penny (on the show she was only about 11, but in the comics she was in her late teens), Judy, & Major Don West.

Thanks for the helpful information. Hope to hear more from you.
add your website in