Like any good sequel, Chuck E Con 2019, a convention focused on Chuck E. Cheese, the pizza-loving mouse, and his pals was bigger, better, and more emotional.

In 2018, Matt Rivera, a longtime Chuck E. Cheese (CEC) fan since he was a boy, saw a gap in the CEC fandom. There hadn't been a convention since 2013. Seeking to fill that void, Rivera created Chuck E Con, an event where memorabilia could be on display, live shows performed in costume, and fans of the franchise could mingle, meet, and just talk all things CEC. My boy and I attended last year's convention, so when this year's gathering was announced, it was inked on our calendar for months.

If you read my review from the 2018 edition, you'll see how much everyone involved enjoyed the experience. But this year's con was much better. And it starts with the venue.


I'm not sure how Matt and his friends decided to move across the Dallas/Ft. Worth metroplex to the suburb town of Keller, but it was a fantastic idea. Old Town Keller is an updated area running along the railroad tracks. Likely it was the original downtown of Keller itself, and, like many small towns, it had fallen on hard times. Now, as its website mentions, it has rejuvenated the small town feel and updated it to a pedestrian-friendly shopping area with small shops and wonderful restaurants. In the mix was the Keller Roundhouse, a rentable venue for any sort of activity.

The entire area was awesome! When we all arrived and found a place to park, there was zero need to drive anywhere else. Right outside the Roundhouse was an open-air seating area where folks who were attending the convention could sit and talk. Everyone seemed to walk to the various restaurants and have a meal or two. We had great BBQ in Roscoe's Smokehouse on Friday night and a good chicken sandwich at The Station Patio Icehouse right next door to the Roundhouse. Starbucks was a mere three-blocks away. Heck, there was even Empire Toys, a new and vintage toy store that actually sold original trading cards from the 1989 Batman movie. Yeah, I bought a pack. No, I didn't chew the gum.

All this is to say that Chuck E Con 2019 was made even better by its location.


The events of the convention lasted two days, Friday and Saturday. After a meet-up at a CEC location in White Settlement, Texas, the convention kicked off in the Roundhouse. The same group of friends ran the 2019 version, including Matt, Emily Sullivan, Brandon McMillan, and Jacob Goldberg, and they upped their game this year. The interior was laid out very nicely, with all the memorabilia along the two side walls with the stage up front. Rows of chairs lined the main area, enabling fans and parents to while away the time chatting when there wasn't a live show up front. 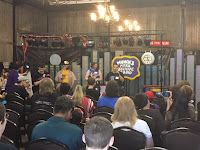 
Attending the second con was like old-home week. It was great seeing again the parents and kids whom my boy and I saw last year. And for my son, who served at a cameraman, recording all the events, being recognized was a thrill. Almost as soon as we came in the door, fellow fans came up to him and said hello. I got to say hi to the parents and other folks I recognized from last year. It was a warm and welcoming environment.

The Fraternity/Sorority of Parents


Speaking of the parents, it's a special parent willing to attend Chuck E Con with their kids. Some fans live in the Metroplex, but we drove up from Houston. That wasn't the farthest trek by far. A trio drove over from Birmingham, Alabama, while an entire family flew in from New York. I met a young man who flew from Florida and another from Georgia. Another family drove two days south from Colorado. Safe to say that fans of CEC came from everywhere, and there were still some my son knew who could not make it.

I got to meet and chat with a dad who was also fan. He and his family are from Colorado and he's actually purchased a complete vintage animatronic show that he plans to install in his basement. Speaking of the animatronics, I met a young man who enjoys buying old robots that do not work and restoring them. He brought one to the con to show. According to his mom, she thought it might have been a scam, but when the giant box arrived at their house, she knew it was real. It was this young man's birthday on Saturday, so he got feted by Chuck and his pals with the birthday song. Pretty darn special.

The Guests Were Amazing


Speaking of special, Matt secured some VIPs to the con this year. Matt Daniel works in CEC Entertainment. He focuses on the videos you see in the stores as well as some voice-over work. He arrived on Friday and sat for an interview session and meet-and-greet. 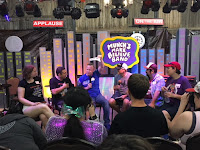 Saturday brought out the big names. Jeremy Blaido is the voice of Jasper T. Jowls, Chuck's canine pal. Jeremy caused a stir among the folks in the room when he arrived, but it was nothing like that of Duncan Brannan. You see Duncan was the long-time voice of Chuck E. himself. If you were a fan or went to the stores during the 1990s and into the 2000s, Duncan's voice was the one you heard. Heck, my boy does an imitation of him. When he arrived, it was fun to hear the ripple of recognition associated with "Duncan's here" filter around the room. His Q & A with Jeremy was the highlight of the entire con for me because every question I had as a casual CEC fan--mostly about the voice-over work in particular--they addressed. I nearly--and should have--walked up and got a picture with them. Missed opportunity.


There were a few emotional moments at the con I wasn't expecting. One of Duncan's answers revolved around favorite moments while being the voice of Chuck (and a certain purple dinosaur). He talked about visiting hospitals with sick kids as being one of the more humbling experiences he's done. If he and his work can bring joy to folks in their darkest of times, he said, then his work is well done. As a parent, just imagining my own kid sick and having someone like Duncan lighting up their day, well, it got to me.

But nothing like later on Saturday evening. During one song, the dedication went out to the members of the fandom who are no longer with us. There was a couple who showed up in the evening and even my boy didn't know who they were. Turns out they were the parents of a special fan who lost his battle to cancer. After the special song, each of the characters walked up to these parents and gave them a hug. It got to me, big time. I cannot imagine the loss of a child, but I hope they know that their son will live on in the CEC fandom for years to come.


I'm far from a die-hard CEC fan although I do pick up bits of detail along the way. I'm just a parent accompanying his kid, but I enjoyed the convention quite a bit. I loved seeing these fans and parents again. I enjoyed walking around Old Town Keller, just killing time between shows with my boy. I liked the familial vibe of the entire weekend.

Every property has its fandom. I'm a comic book, Star Wars, super-hero movie geek, so I certainly get the CEC fandom. I'm just so glad that the fandom, and especially Matt and the rest of the folks who run Chuck E Con are working so hard to create such a great convention.