I Flew With iFly

James Bond did it in Moonraker. Tom Cruise does it all the time. Now, I count myself among the flyers. But the question was: Did I like it?

For Father's Day, my family purchased two flights at the local iFly indoor skydiving place here in Houston on the Katy Freeway. I had never done anything like it before. Back in college, a fellow Longhorn Band sax player enjoyed real skydiving and always tried to get some of us to join him. A few weeks ago, a fellow dad enjoyed his first tandem jump. Seeing that news on Facebook, I commented to the wife that it looked like fun.

Which was why my wife jumped at the chance to see how I might do with skydiving. In a controlled environment. So I wouldn't want to jump out of a plane. Smart lady.


We had a 6:30 pm appointment. The wife and the boy accompanied me in the uniquely shaped building. After checking in, we made our way upstairs.

Dominating the center of a large room was the wind tunnel. It went up something like fifty feet, maybe less.  The lower ten feet or so was made of clear plastic. It gave viewers and family members a clear view of their flyers. It also provided a front-row seat to the experienced flyers then in the tunnel as they bobbed up and down, twisting and turning, flipping this way and that.

It was fun just to watch. But man did I want to get in there.


My team of eight consisted of a group of five teenagers, another pair of youths, and me. Our flight instructor was Woodbury. Her love of skydiving was palpable on her face as she answered all the questions I kept asking. How big was the fan in the floor? Well, actually, there are four giant fans on the roof and the air is circulated into the tunnel in that way. How does our one minute flight time equate to an actual skydiving time? It's about equal. Are our flight suits baggy because we're amateurs? Yup. It helps with wind resistance and giving instructors something to grab onto in the tunnel.

I'm not ashamed to admit I had a few Top Gun images enter my brain as I shrugged into the full-body suit. Just the mere act of zipping up and seeing myself in the suit got my blood pumping. Throw in the ear plugs, the special goggles, and the form-fitted helmet and I was ready. Did I feel the need for speed? Of course! 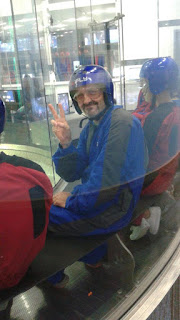 
The group of five went ahead of me and I got to watch how each of them did. Some did quite well, controlling their bodies in such a way as to allow Woodbury to move her hands away, letting the kids fly solo. If they got too high, she'd grab some of the flight suit and bring them down.

Finally, it was my turn.

A hundred movie images flashed in my mind as I approached the open door. At the front of my brain was the imperative not to screw it up. Sure, it was my first ever flight but I wanted to do it well.

Upon entering the doorway, the instructions were to raise your arms, keep your chin up, and belly flop onto the fan. For each member of my flight team, Woodbury guided us as we leaned into the wind. The same was true for me. I leaned into it, smiling with my mouth closed (my wife's suggestion).The roaring wind caught me and, with Woodbury's help, I was flying.

My internal fears of not being able to do it well vanished quickly. I was able to establish a stable flight position and maintain it. The instructor's hands would zoom into my field of vision every now and then with hand-signal instructions. Open my fingers to let the air flow through them. Late in the first flight, she allowed me to use my hands as rudders. I was able to change my position, turning left then right.

All too briefly, my first minute was over. I grabbed onto the rubber handles of the doorway and brought my legs inside. Standing on the edge, I got a couple of congratulatory pats on the back from Woodbury, confirmation I did well.

Oh my gosh! It was one of the most thrilling one minutes of my life. When asked what superpower they'd want, flying is the one most people choose. It's my choice, too. Now, I got to experience it. 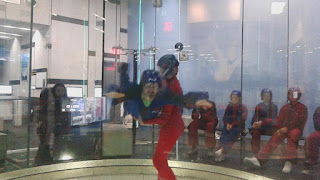 
When it came to my turn again, I exercised the upgrade I knew I wanted even before I suited up. The high flight. For the first thirty seconds of my second flight, Woodbury guided me in hand maneuvers. She pointed me in the direction of my wife and boy, each of whom had their phones recording the experience.

Then, Woodbury exchanged places with another instructor. He grabbed my flight suit at my back just behind the shoulder and my left thigh. With a change of his body's position, up we went. We turned and then we lowered. The up again, higher, and then back down. Finally, the last time, we went really high, maybe 60% the height of the entire wind tunnel. I had kept my mouth shut during both flights, but I let out a whoop on that last flight.

It's amazing how fast a minute can go when you're flying. At once brief and long.


I think you can tell by this writing that I absolutely loved flying. I could have done it until closing time, taking my turns in between other flyers. I loved it so much I purchased six minutes for a future date. Next time, I hope to bring the boy into the wind tunnel


The iFly folks here in Houston were great. All the staff worked efficiently, making sure we amateurs were safe and having a great time. Woodbury was not only a great instructor, but her enthusiasm served as an ambassador the joy of indoor skydiving. Even when she was helping each of my fight team work through our flights, you could see her grin behind her visor. Then, after we were all done, she got her own flight time. The coolest thing was her atop the wind tunnel literally standing on the wall.

If you have even an inkling of a desire to try indoor skydiving, I cannot speak more highly of the experience.

Up until tonight, snow skiing was probably my favorite sporting activity. It just got demoted to second place.
at June 20, 2019
Email ThisBlogThis!Share to TwitterShare to FacebookShare to Pinterest
Labels: Houston, iFly, Sports