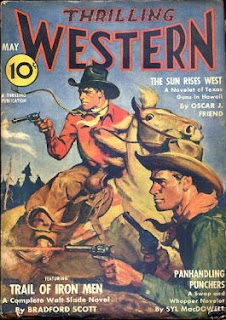 Last week, I attended a small comic convention here in Houston that served as a throwback to the early days of comic book fandom. It was hosted in two rooms in a hotel. One room was devoted to toys; the other to comics. But, happily for me, the owner of Bedrock City Comics brought his pulp magazines.

I had been to his shop last month after I discovered Bradford Scott and his pulp hero, Texas Ranger Walt Slade, in paperback. After reading my first Slade novel, I wanted to read one of his old pulp exploits. I bought one issue of Thrilling Western and reviewed the Slade story. Naturally, I beelined to that section of the pulp magazines on sale last week, but I’m not here to talk about my next Slade story.

No, what I’m here to talk about is the odd mash-up of a western in a World War II setting.

The cover date for Thrilling Western volume 29, #1 is May 1942. I’m not sure how much lead time editor G. B. Farnum gave to writers, but Oscar J. Friend’s story was definitely written after December 7, 1941.

“The Sun Rises West” features cowboy Chuck Hardin. He’s been hired to work a cattle ranch out on Hawaii. With just the description of Hardin, you know you’re in for a treat: other than battered suitcases and his typical cowboy attire (you know what I’m talking about), he brings his Winchester and two double-action .45 six-shooters. The other character comment on Hardin’s attire more than once.

There’s a girl here, but she doesn’t figure too much into the story other than the typical rivalry between Hardin and Montague Townley, the ranch’s manager. With a name like that, you also know what kind of man he is. Well, there’s also a native Hawaiian co-star in Hamelaki George who fills the role perfectly.

And you already know who the bad guys are just from reading the story’s title and sub-title: A Novelete [sic] of Texas Guns in Hawaii. Yup, the Japanese, specifically the houseboy Mikimatu. The old pulps were filled with descriptions and terms we in the 21st Century cringe at, and that’s all there. But Friend piles it on. After being introduced to Mikimatu, cowboy Hardin never pronounces his name correctly for the rest of the story, instead using terms like “Mikiblotto.” The physical
descriptions are worse. But that was a different time, and when Friend wrote the story and the readers consumed this story six months after Pearl Harbor, I don’t suspect many minded.

Speaking of Pearl Harbor, it doesn’t take a genius to know that’s when this story takes place. The day is lost for America, but Hardin, naturally, wins the day at the Robinson Ranch.

The story is good and about what you’d expect. Not much to write home about, but it’s a fantastic snapshot at a particular time and place.
at September 15, 2017
Email ThisBlogThis!Share to TwitterShare to FacebookShare to Pinterest
Labels: Blog, Pulp Fiction, Pulp heroes, Pulp Westerns, Westerns, World War II

Friend also wrote THE KID FROM MARS. And was probably the worst editor of STARTLING STORES and THRILLING WONDER. possibly the worse of CAPTAIN FUTURE's two editors Aside from that, he wasn't good for much. But he could clearly work to deadline...