I first made the acquaintance with Walt Slade a couple of weeks ago on my vacation up to East Texas. Then, it was a novel I picked out at random from a wonderful antique store in Jefferson, Texas, and read most of on the vacation itself. I enjoyed FOUR MUST DIE so much that I sought out more Walt Slade westerns. Turns out I already owned one in my large collection of old paperbacks I inherited from my grandfather.

KILLER’S DOOM was that book and man what a title. And it’s a pretty nifty cover, too. The back description leads off with a banner headline: “Catch Covelo!” That is the underlying plot of this novel.

Slide is out west in El Paso and he’s received a threatening letter:


“El Halcon, you will not catch Juan Covelo, but some day Juan Covelo will catch you, and then for you it will be muy malo! Muy malo!”

For those that don’t know, El Halcon is Slade nickname. It means the Hawk, likely because he has such good eyesight. Anyway, Covelo is a legend in the area for he rides around with a great black hood over his face, committing all sorts of horrible crimes and violence upon his victims. Slade correctly reckons it is to hide the bad guy’s true identity so he takes up the case.

Covelo has a gang of owlhoots riding with him, eight if I remember correctly. What makes this novel so grand is watching over Slade’s shoulder as he investigates, gathers evidence, fights, shoots, and whittles down the gang number until there is only Covelo left. That's not a spoiler. That's a western trope, one with which I have zero problem.

When I mentioned to my dad that I had read that first Slade book, he immediately started rattling off all the traits Slade was known for: his horse, Shadow, his singing, his rapid fire shooting, his eyes. I was taken aback with the mention of singing. A singing cowboy? In a book? In FOUR MUST DIE, not all of those were apparent. They were all there in KILLER’S DOOM, including the singing.

Shadow, the horse, was also on full display. I got a sense of his character the first time I met him, but in KILLER’S DOOM, he actually talks! Well, not really, but he and Slade have such a good camaraderie that author Bradford Scott (really A. Leslie Scott; click here for some background) actually wrote dialogue for Shadow, then followed it up with something like “…his snort seemed to say.” Charming.

KILLER’S DOOM also introduces the reader to a past villain, one that Slade already brought to justice. It was nice to see that the author understood weaving ongoing threads throughout this long series even back in the day when each book seemed to stand on its own.

I enjoyed KILLER’S DOOM about as much as FOUR MUST DIE--maybe a tad more--and I really love the character of Walt Slade. I have already started my third Slade western in a row!

When it comes to westerns and western writing, there are still things, techniques, and terminology I need to learn. As part of my education, I read with a pencil in my hand and circle various words and phrases I see over and over again. From there, I extract them into my own files and read them over before and during the writing of my own westerns. Here’s a sample two page spread. 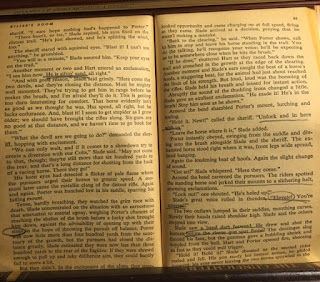 I highly recommend the Walt Slade westerns. Now that I know what to look for (hat tip to James Reasoner), I have spotted them in just about every used bookstore I’ve entered in the past few weeks. I love discovering a new-to-me series in which I get to scour bookstores in the coming months and years hoping to find yet another Walt Slade adventure.

Thanks for the heads up

I like the Bradford Scott westerns a lot, too. Mainly for the fast pace. But I always seem to come away wanting a little more character shading. And in this one, I got really tired of the artificiality of so many characters alluding to how great Slade is, and how he "really saved our bacon!" But that's the old pulp style, I know.