My Life with Star Wars 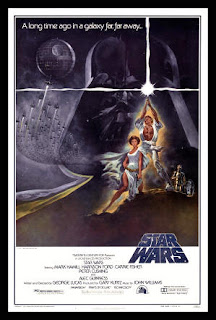 If Star Wars had never existed, I wouldn’t be the man I am today.

A bold statement? Perhaps, but the more I think about it, the more truth comes to light.

The first version of this essay had me starting from before 1977 and moving forward with my life. I didn’t figure y’all’d want to read that, so I abandoned it in favor of some higher level thoughts.

I still see the world with childlike eyes. Yeah, I’m older than Star Wars with hair graying around the temples and adult responsibilities, but I still possess a childlike wonder for the world. It still amazes me that my iPhone is more powerful than the computer that landed a man on the moon. When I ride my bike, I still channel my younger self who inverted the handlebars of his ten-speed to better resemble the steering mechanisms of Luke Skywalker’s X-Wing so that I could shoot imaginary T.I.E. Fighters that took the real-world form of trash on the sidewalks. Every now and then, when I’m at a new place—say, my trip to Big Bend last year and the rugged land around the hotel—I still see areas where I could play with my action figures. BTW, I still have them all, stored in my Darth Vader case. In short, Star Wars gave my childhood imagination the power to roam across galaxies.

My love and appreciation for instrumental music is a direct result of the soundtrack to Star Wars. I’m an only child so I had to discover many things on my own. From the first time I saw the movie, the music captivated me. I bought the soundtrack—and promptly learned to see the movie in my head because of John Williams’s score. Little did I know I was learning about classical music and jazz. I just let the aural blanket settle over me and through me. I wore out my first copy of the soundtrack. Oh, and I had that John Berkey poster on my wall as fast as I could open the original cellophane wrapping. The music—specifically the main theme, Princess Leia’s theme, the Force theme, the throne room theme—helped me replay the movie in my head. As a kid, I don’t remember being irritated that the songs were somewhat out of order. I just consumed them all. From Star Wars emerge a love for John Williams music, more film scores, classical music, and jazz. Heck, in sixth grade, when I chose to learn alto sax, I picked that instrument because it was one of the horns used in the Cantina Band song.

My love for all things science fiction and fantasy started with Star Wars. Sure, the fandom was already present—I enjoyed Space: 1999 and The Six Million Dollar Man and Fantastic Voyage—but Star Wars just jumped the fandom to lightspeed. I discovered Star Trek because of Star Wars. In reading the novelization, Splinter of the Mind’s Eye by Alan Dean Foster, and the original Han Solo trilogy by Brian Daley led me to other SF books. It didn’t hurt that Foster also wrote the Star Trek Logs. I discovered Edgar Rice Burroughs’s John Carter in that magical time between Star Wars and The Empire Strikes Back and I’ve never looked back.

Speaking of that magical time from 1977-1980, I contend it was probably the greatest time to be a fan. We only got a small peek into that galaxy far, far away. The possibilities were limitless. All that we didn’t know intrigued us. The characters n the Star Wars universe were as broad as our imaginations. Nothing against how it turned out—it’s one story about one family which, in effect, shrank the galaxy—but up until Vader tells Luke about his true parentage, the edges of the Star Wars universe couldn’t be seen. When Marvel Comics published Star Wars #7, the first story not from the film, I was over-the-moon. More Star Wars! Heck, I even remember watching the Holiday Special on a black-and-white TV in a hospital and loving it. The lead-up to Empire was wonderful as was the lead-up to Return of the Jedi. But it was nothing like 1977-1980. The year 1991 was also good with the publication of Timothy Zahn’s Heir to the Empire. The only time that comes close to what it was like in 1977-80 was late 1998-1999 in the build-up to The Phantom Menace. Never mind what you think about the movie, the fact that we were getting more Star Wars for the first time since 1983 was beyond awesome. Seeing that first trailer to The Phantom Menace opened wide the door of childhood—it never really closed—and it hasn’t faltered much since then, despite adulthood, marriage, and fatherhood.

Star Wars is my time capsule to childhood.

For that, I am eternally grateful. Star Wars taught me in ways that might seem odd to some. With Empire, I learned that heroes don’t always win even if they prevail. With Jedi, I learned there is good in most people, even the most vile. I learned patience in having to wait three years for the next movie. I learned to fill up my head with facts no one cared about but seemed like the most important information to me.

I could go on and on about this movie and this franchise, but I won’t, at least not here and not today. Suffice it to say Star Wars is an integral part of what makes me the man I am today. If not for Star Wars, undoubtedly something else would fill up that space. But I am so glad that Star Wars arrived at the time it did, forty years ago today, at the age I was. It helped me grow up, imagine, dream, soar, cry, cheer, love, learn, mourn, and more. I am a proud member of the Star Wars Generation.

Tonight, I’ll be celebrating by pulling out a VHS copy of the first movie and giving it a viewing. I haven’t seen it a bit. That first movie is too special. When I start that film, more than just about any other, I’m no longer an adult. I am an eight-year-old kid, wide-eyed with wonder, transported to a galaxy far, far away.

Happy birthday, Star Wars. Your Force will be with me. Always.
at May 25, 2017
Email ThisBlogThis!Share to TwitterShare to FacebookShare to Pinterest
Labels: Star Wars