The Killing of Lars Fulton: A Junction City Western 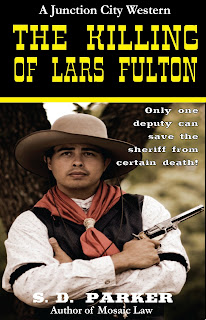 An ambush leaves an innocent man dead and the sheriff behind bars, branded a murderer.

IN AN EXCITING NEW JUNCTION CITY WESTERN NOVELLA FROM AUTHOR S. D. PARKER, Sheriff Walt Eason finds himself accused of murder, and only Deputy Diego Lange can save him.

Rustlers have stolen heads of cattle from all the biggest ranches in Junction City, Texas, including Bartholomew Conway, the nemesis of Sheriff Eason and his deputies. But when the lawmen open fire on a suspected owlhoot, the dead man is not a thief, but one of Conway's own ranch hands.

Now, Junction City's richest citizen has all he needs to get rid of Eason...at the end of a hangman's noose. Eason's fate falls to his junior deputy, Diego Lange, a half-breed with few friends in town. Lange has only hours to uncover the truth about Lars Fulton and the strange thing discovered in the corpse's pocket or Junction City will have a new sheriff, one who doesn't look too kindly on Diego Lange.

If you like action-packed tales in the tradition of Robert Vaughn, Paul L. Thompson, or Frank Leslie, you'll enjoy "The Killing of Lars Fulton," the first novel-length tale in the Saga of Junction City.

“I’m not sure I can do it,” Deputy Diego Lange whispered. He crouched on a small rock outcropping overlooking the land outside of Junction City. The air was warm, even an hour toward midnight. The new moon cast no glow on the land below. Overhead, the stars sparkled in the night, the constellations mingling among themselves. The heat of the day was giving up its last fingers and succumbing to the cool night air. The smell of sage and hot rock still tickled Diego’s nose and those of his companions.

Sheriff Walt Eason grinned in the night. “It ain’t no big thing.”

“It’s no big thing for you, Sheriff,” Diego whispered back. “You do it all the time. Hell, you’ve already started doing it seeing as how the election’s coming up. I ain’t,” he searched for the right word, “as accomplished as you.”

Off to Diego’s right, he heard a soft snort from Jack Moore. “If I was standing up for my brother, I’d be so drunk by the wedding it didn’t matter what I said.” Moore was the senior deputy among Eason’s rank of three. Typically, he didn’t let anyone forget that he was second only to the sheriff. Even tonight, as the three of them hunkered down to catch some cattle rustlers, he made sure to get the catbird seat on the outcropping. He claimed he had eyes like an eagle’s and could see clearly in the night. Diego knew that Eason tolerated Moore and acquiesced. But Diego was still irritated that Moore decided to stick his nose into business that was his.

Eason inhaled deeply and let out the air slowly. “When it comes down to it, all you have to do is speak from the heart. It’s your brother’s wedding. He asked you to stand up for him. Sure, that usually means you gotta give a toast of some sort. Everyone will be looking at you, making you feel puny as an ant. Put all that stuff away. Just remember, this is your brother. Other than your parents, you know him best. All you have to do is…” He stopped and held up a hand. “Quiet.”

All three men laid flat on the rock their eyes overlooking the grazing area. The dark husks of cattle gently stomping their feet could not dampen the sound of footfalls on the dirt.

Down a ways, just to the other side of the cattle, they all spied the distinctive silhouette of a man. He wore no spurs so the only sound he made was the gentle clomp of his boots. He wore a hat so the lawman couldn’t make out his face. But they all saw what he was doing: making his way toward the cattle.

In a low voice, Eason whispered, “Remember we have to catch him in the act. Before that, he’s just a man out on the midnight walk.”

Diego understood. He began to breathe more shallowly, his mind telling him even his breath would give away their position. Moore, on the other hand, fidgeted in his position.

The shadowy figure made his way along the perimeter of the group of cattle. Curiously, he reached out a hand and touched the romp of each cow.

Diego frowned. “What is he doing?”

Eason shushed him. “Wait and see.”

The man continued to walk around the perimeter. If he kept going that way, he would get perilously close to where the lawmen had stashed their horses. If he found the horses, all bets were off.

That seemed to be the thinking of Deputy Moore as well. “He’s gonna find the horses,” he hissed.

“Let him,” Eason said. “It means we have the element of surprise.”

“Why don’t we surprise them right now,” Moore said. He moved. Small pebbles dislodged and tumbled down the outcropping.

The shadowed man heard and turned toward the sound. He drew his gun and aimed, the barrel swiveling back and forth, not sure from where the sound came..

The lawmen already had their guns in hand. Under earlier orders from Eason, they held their fire. Besides, even with starlight, they couldn’t get a direct bead on the shadowed man’s location. But when the man opened fire at them, the blossom of flame from his muzzle would give them all the pinpoint direction.

A lead slug pinged near Diego’s face. He reacted without thinking. He pulled the trigger of his gun. Moore did the same. Eason held back. Gouts of fire poured out from the barrels of their revolvers. The shadowed figure fell in a clump.

“Dammit!” Eason said. “I said hold fire until he did something.” He sighed, sending plumes of dust in the air. He holstered his weapon and got to his feet. “Come on.”

Diego felt chastened by his mistake. He had reacted without thinking. Typically that was a good trait for a lawman to possess. But he was still learning. Sheriff Eason, to his mind, was the best teacher in the world. Now Diego had disappointed him.

Eason, Diego, and Moore trundled down the outcropping and approached the shadowed figure. Not knowing if they had killed him or not, they approached from three different angles. The two deputies still held their guns.  Eason approached unarmed.

The downed man law sprawled on the ground. His gun hand was empty. Eason kicked the pistol out of reach just in case. The dark patch under the man was likley blood. The more Diego looked at the patch, the larger the patch got. It was blood alright, seeping out of the wounded man and being soaked up by the dry ground.

Eason reached into a pocket and flicked a lucifer match to life with his thumbnail. He crouched down and brought the light closer to the dead man’s face.