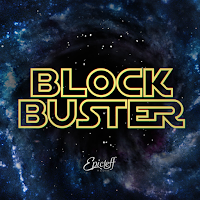 That's what I think about Blockbuster, the six-part podcast that focuses on the friendship of Steven Spielberg and George Lucas in the 1970s. The third member of this revolutionary team was composer John Williams.

Look, I would have listened to a plain old podcast just reciting the events of these visionary directors in the 1970s as they created from whole cloth the blockbuster movie. I am part of the Star Wars generation. I never tire of hearing or watching World War II histories, so, too, do I never tire of hearing about 1970s film making.

But creator Matt Schrader went one better. He scripted this story as if it were an old time radio. Don't be fooled by this phrase. This movie-of-the-mind is utterly current, with the latest technology brought to the sound design, that makes me hopeful things like this might come around more often.

I can't even be sure how the podcast popped up on my radar in the last week or two, but it did. Five of the six episodes are available. Like I said, I'm a sucker for this stuff, but by the first few minutes of episode one and I was hooked. It is an excellent piece of craft, and the storytelling is rich and immersive.

How immersive? Well, when they get to late 1976 and early 1977 when each director faced massive challenges to complete their respective films, you're actually wondering if they'll get the movies done. In fact, in episode 4, there's a moment with the Star Wars production that actually made me swear under my breath...and I knew the end result!

The voice cast is stellar. I don't know their names, but the folks who bring Spielberg, Lucas to life, as well as their friends Francis Ford Coppola and Martin Scorsese are spot on. And don't get me started on the casting calls for Han Solo.

Heck, I even learned something about John Williams I never knew.

I'm starting episode 4 later today on my home commute and I think episode six drops next week. It'll end up being a three-hour movie for your mind.

Just give it a listen. If you're even remotely interested in the stories of these two friends and rivals, you'll have a blast.


Now, I've listened to episode five, the one where the characters first hear the music John Williams composed for Star Wars. At the time, Lucas was quite depressed. He didn't think his movie would be very good. It wasn't well received by his small group of peers. The executives at Fox, including champion Alan Ladd, Jr., had all but given up and expected a flop.

There, Lucas sat in the recording studio in London. There, Williams stood on the podium, ready for that initial baton drop.

And the music started.

I've always been an easy cry, but just hearing this famous music in this one scene, knowing the stakes, it was emotional. Goosebumps and some extra tears behind the lids.

It was a great moment in this incredible series and in the history of cinema. That the creators of Blockbuster nailed it as well as they did is yet more proof how good this podcast series is.


Episode 6 dropped this morning and I couldn't wait for my morning commute.

And I was incredibly rewarded.

What makes Blockbuster so magical is the intimacy of the story. Now, in 2019, Lucas and Spielberg are legends, larger-than-life masters of film, but in the 1970s, they're just young directors trying to make things work despite uncountable challenges and setbacks. Matt Schrader wrote the scenes you wished you could have witnessed. Not the interviews or awards ceremonies, but the ones where George and Steve just talk. Brilliant.

The best thing about episode six, titled "May 25, 1977," is how the characters learn about the success of Star Wars. We know what happens, but George, Steve, and Marcia Lucas in Blockbuster don't. Wonderful. I actually had goosebumps ripple across my skin when Marcia looks across the street and realizes the line around the Chinese Theater is for "You're movie, George!"

A large part of this podcast series features the music of John Williams. Perhaps the best scene in the entire series was when George heard the Star Wars theme the first time. When you have Williams's music, I imagine it would be a difficult challenge to compose original music. But Ryan Taubert and Benjamin Botkin knocked it out of the park. There's a special magic when you watch movies like Star Wars, Jaws, Raiders of the Lost Ark, ET, Superman, Jurassic Park, and Harry Potter 1 when the visuals on the silver screen and the music you hear instantly transport you. Taubert and Botkin nailed the intimate vibe of this series. How good is the music? If I didn't know any better, I would have sworn John Williams himself wrote the score.

It's one thing to have content like this available for free. But it's another thing entirely when, upon completing the entire broadcast, I happily headed over to their site and donated money. It's one of the best investments you can make. I can't wait to hear what comes next.

How good is this nearly three-hour Blockbuster podcast series? It's one of the best films of the year. Never mind that it's audio only. In some ways, that makes it better.

Well done, everyone involved with Blockbuster. Very well done.
at May 17, 2019
Share