Music Review: No Place Left to Fall by Bill Champlin 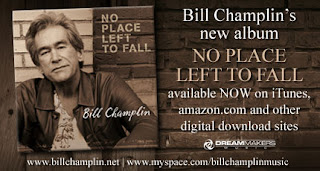 Bill Champlin wears the mantle of a musician’s musician. He’s a studio wizard. He’s an in-demand vocal stylist and arranger. He shows up in places you’d expect—Toto CDs or on albums from other west coast musicians—and places you may not expect—from Amy Grant’s 1988 “Lead Me On,” Paulinho Da Costa’s 1978 album “Happy People.” He sang the theme song for the TV show “In the Heat of the Night.” He’s won Grammy’s for writing (Earth, Wind, and Fire’s “After the Love Has Gone” and George Bensen’s “Turn Your Love Around”). And he’s virtually unknown to the general public.

Well, except for his tenure with Chicago. And even then, folks might have a difficult time actually naming him. “Isn’t he the other guy singing ‘Hard Habit to Break’ with Peter Cetera?” Yes. “Is he the guy that sings ‘Look Away’?” Still yes. After that, most folks draw a blank. Even his first band—with the hint right there in the band name—don’t give folks a clue as to who Bill Champlin is. That band name? The Sons of Champlin.

One thing you immediately notice with any Champlin-touched tune is the impeccable musicianship. These things are slickly produced. Some might argue that they are over produced but, when you consider all the things you can do in a studio, it’s Champlin’s restraint that is a hallmark of his work. The thirteen songs on this new CD have lots of elements to them. It really takes some concentrated listening with headphones to make out all the little nuances Champlin deploys.

A major presence of this album is Champlin’s B3 organ. For folks like me who discovered Champlin’s work via Chicago, Champlin’s B3 organ sound was gradually introduced, first in concert in the early 90s. It showed up on the 22nd album, Stone of Sisyphus but, then that CD was never formally released until 2008. It wasn’t until Chicago’s big band CD, Night and Day (1995) that the B3 organ got it studio premiere. And it’s there, right on track one and playing underneath most every track. Chicago 25: The Christmas Album featured the B3 on more songs, especially on what I now consider to be the definitive take on “The Little Drummer Boy.” The B3 is prominent on Champlin’s other 1990s solo releases (be sure to check out “Mayday,” the live recording from 1997) as well. You can tell when Champlin plays a real one, too. The organic, natural quality of a real B3 is heads and shoulders above anything a synth can produce.

All this is to say that the B3 shines on this new album. Literally, from the opening notes on track one, the B3 is spread like honey over all of these songs, sweetening and making it all just taste a little better. The coolest thing about the B3 is the judicious way most organists play the instrument. It’s little tidbits here, a riff there, a counter melody under a rhythm guitar, the syrupy foundation of a swampy blues song, it’s just there. The smooth, silky quality of the B3 and blue-eyed soul of Champlin’s voice just go together you wonder why he didn’t start sooner. Two highlights of the B3 on the new album is “I Want You to Stay” and the opening, funkified riff of “Tuggin’ on Your Sleeve.”

Speaking of riffs, this Champlin dude can tear it up on rhythm guitar. Not like Van Halen or any of those guys who play thousands of notes per minute. (Remember the Emperor in Amadeus: “Too many notes.”) I’m talking about a competent musician who knows the instrument, what it can do, and, most importantly, how it can compliment the song in question or his singing. I know Champlin collaborated with long-time friend Bruce Gaitsch (the iTunes download does not include liner notes) but I don’t know which songs on which he actually plays guitar. But any Chicago concertgoer of the past couple of years where Champlin got out from behind the keyboard and strapped on a guitar knows what the man can do. And he does it well here.

One interesting acoustic guitar-based piece on the new album is “Look Away.” Yes, it’s the same song that went to #1 in 1988 and was transformed into an acoustic rendition on the 1995 Night and Day tour. Champlin uses the acoustic version as a starting point but basically creates a new song. He takes the song—where the intent of the words can certainly get lost amid the trappings of a power ballad—and brings out its quite personal and painful message. It’s not too big a stretch to say that if Crosby, Stills, Nash, and Young ever sang a love ballad, it would not sound too different that this version. Oh, and if you want to know the kinds of jibs and jabs the B3 can add to a song, check out this song after the whole band kicks in.

Another feature of a Champlin-created song or album are the vocal arrangements. The Chicago Christmas CD is infused with multiple voices, layer upon layer, creating a vocal mélange that is greater than the whole. The same holds true here. More often than not, Champlin sings the lead and the harmony. It works although I have to admit it’s always been strange hearing a lead singer being backed up by himself. The opening vocal ensemble on “Never Let Go” is a perfect example of this type of vocal stacking. This song reminded me of the neat experiment Champlin did in the 1990s with Jason Scheff and two singers from Toto. On the CD, “California Dreamin’,” the four vocalist cover famous rock songs a capella with a lead singer and the backup singers (each man takes a turn at lead) doing all the instrumental parts. How cool is it to hear “Hotel California,” complete with the ending guitar solos, all done with voices. It’s a little like Take 6 if you need a different avenue into your memory.

When it came time to ask Champlin to join Chicago in 1981, it seemed like a no-brainer because both Chicago and The Sons of Champlin had horns. All of Champlin’s CDs have at least one song that puts the horns up front and in your face. This time out, it’s the Fat City Horns from Santa Fe and the Fat City Horns. And when they say fat, they really mean it. “Stone Cold Hollywood” is that song on this album. Six horns, bleeting and blowing, complete with a nasty bari sax, man, it’s like a tune from the dirty side of town. Did I mention the bari sax? Man, throw on some headphones and just listen for it. It’ll make you grin like you just ate all the cranberry sauce before the Thanksgiving dinner was supposed to start. You know it’s wrong but, damn, it’s so good.

Bill Champlin emerged from the San Francisco scene in the late 1960s. In his outlook on life, making music, and the music biz, he’s never really left that time. You go on over to his webpage and the forum there—yes, he interacts with fans—and you can get a taste of what I’m talking about. He doesn’t say “thing,” he says “thang.” He doesn’t say “love,” he says “Luv,” drawing it out, nodding and winking, where you know how he’s meaning it. And he doesn’t mince words. There’s a great interview up on YouTube (here’s the link from my page) from earlier this year where Champlin tells you what he thinks and doesn’t back down from it. A nice quality from a member of a business that too often tries to please the suits and the audience with pablum and platitudes.

And it is this truthfulness—in the music, the lyrics, the spirit—of this CD that makes the thirteen-year gestation seem short. “No Place Left to Fall” is a consummate album of songs by an exceptional musician, lyricist, and singer. Bill Champlin may not be a household name but you get the sense that he doesn’t care about that stuff one way or another. Certainly he wishes mid-level artists who never get the recognition they deserve—while the talent-less phonies rake in the dough—and lends his name around. And other musicians know his reputation and bring him in for an assist. All that is well and good and part of what it takes to be a professional musician. But you can tell that it’s the Music that drives him. And it is through his music that he is known…even if you don’t know it.

Later update: I posted the link to this review on Bill Champlin's forum. The man himself read my review and wrote the following back on October 7:

Scott, I read your review and I thank you for the kind words. Not a lot of people get where my stuff's comin' from and you seemed to get it. People like it but not many "Get It". Thanks again, bill c.
at September 29, 2008
Email ThisBlogThis!Share to TwitterShare to FacebookShare to Pinterest
Labels: Movie/Music Mondays

He wrote "Turn Your Love Around?" I love GB's album Give Me the Night. Some really nice charts on that record, with some great orchestration by Quincy Jones, as if he could do any wrong.

Nice tribute to what appears to be an unsung hero.

My favorite Benson record is the lesser known "20/20." Total cheese, but if you're into that, it doesn't get any better!

Nice review. You opened my eyes to something new. I was unaware of Champlin but obviously I have been listening to him for years.

Chris: I love cheese, musical and culinary. Ironically, I heard the Champlin version of "Turn Your Love Around" first (altho recorded second) and I was surprised when I later heard Bensen's version. Champlin's version is on his CD "Through It All." That's also where "In the Heat of the Night" lands.

David: I'm always glad to evangelize for artists and writers I love. Glad I could help out. I enjoy most of the CHI-guys who make solo records. I love the Cetera records but he's kinda got himself in a rut in 1995. Robert Lamm's CDs are all good. Jason Scheff did a good one back in the 1990s, too. Of them all, here are my favorites (most available at cdbaby.com):

Lamm - subtley + passion
Lamm - In My Head (recut, expanded, and re-released as "Too Many Voices")
Champlin - Through It All
Champlin - No Place Left to Fall
Cetera - One More Story (88; Cetera's best)
The Howland-Imboden Project (current guitarist and drummer) - All instrumental, jazzy, rock-infused, with contributions from some CHI-guys

Great read. Listening to the album again as we speak. One of the most under appreciated musicians around. I have all his CD's had to track several of them down in Japan. Most people are truly missing out on a great artist.